Raybestos Stage-1 Performance frictions are an affordable solution for performance applications that may not require the capacity of the Gen 2 Blue Plate Special, but do require a friction plate that can handle the demands that a stock tan or high energy plate cannot. Stage-1 frictions are not limited to performance, but also enhance heavy duty applications by increasing holding capacity, while being able to withstand higher temperatures associated with towing heavy loads. Raybestos Stage-1 Performance frictions are the best choice for street rods, tuner cars and mild street strip applications.

Question: I recently purchased a gen 2 Blue Plate Special Clutch-Pack Module for a 4L60E transmission. I noticed the Low / Reverse and the Reverse Input clutches are tan colored while the rest are blue. Why would Raybestos put these tan frictions be in a Hi-Performance friction module?

Answer: A clutch or band which is applied when going from Park or Neutral to a forward or reverse gear is considered “statically” applied. In the 4L60E the Low / Reverse clutch and the Reverse Input clutch are statically held clutches because they engage while the vehicle is at a stop. A clutch, such as the 3-4, that is applied during a shift is considered “dynamically” applied.

The color of the friction plates result from the materials and resins used in the manufacturing process. The “tan” colored friction plates we use in the gen 2 Blue Plate Special Clutch-Pack Module for the Low / Reverse and the Reverse Input clutches are a “Hi-Static” friction material. This is a different material than the conventional tan materials used in OE type applications. An easy test for you to do is to take 2 OE replacement Raybestos friction plates, such as the GM 4L80E – Overrun, and squeeze them together (don’t use a steel plate). While squeezing the friction plates together, try to rub them together. The trick is to keep a clamping force while also exerting a sliding motion to push one plate in one direction and the other in the opposite direction. Now do the same with a Raybestos® Chrysler A500/518/618 – Overdrive Direct “Hi-Static” friction plate which is similar in size. Notice the difference? I found the test results are better when the frictions have been pre-soaked but not dripping wet (patted dry). This generic test does not provide scientific data like our test equipment does, but it gets the point across.

When horsepower and torque levels exceed the factory specs, or a transbrake is used, the “Hi-Static” (high holding) material will absorb more power before it breaks away (slips) than a typical conventional “tan” friction material. These “statically” held components are not used during an up-shift and do not require the more exotic materials and processing of the gen 2 Blue Plate Specials. So even though they look like any other TAN plate, they are much more than that. 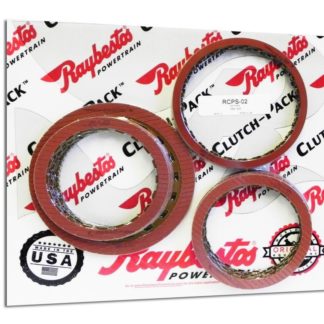