#12. In vehicles with Chrysler RWD transmissions, the manual valve does not allow the converter to be charged in park. This causes delayed engagement and converter bushing failure. Sonnax now offers an upgraded, re-designed manual valve 22771-09 that allows converter charge in park. Fits Chrysler RWD units 1978 up with TCC.

For use in conjunction with ’78-later pressure regulator valve only; see instructions for details.

OE manual valve design does not allow converter or cooler charge in Park.

Listed Chrysler transmissions often suffer delayed engagement, converter bushing failure, overheated converters and dragging forward clutches. These symptoms can be a direct result of the design of the OE manual valve, which does not allow converter or cooler charge in Park. Sonnax manual valve 22771-09 is engineered to overcome the OE shortcoming by allowing fluid into these critical circuits when in Park. 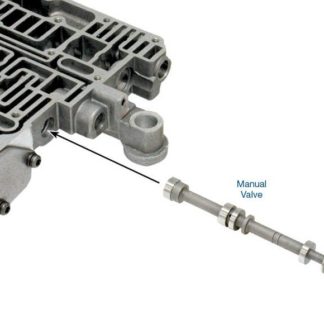